The Art Institute of Chicago’s Indian Art of the Americas permanent gallery has increased its showing of prehistoric North American art with a new display case installed in August. This incorporates birdstones and bannerstones already on display with a major loan of ancient pipes from the Steve and Susan, and Gordon Hart family collection. Steve and his father, the late Gordon Hart, have a long history of lending pieces from their remarkable collection to art and natural history museums both in the United States and abroad. Four Great Pipes and a Hopewell platform pipe are now displayed along with birdstones previously loaned to the Art Institute by Oliver Skrivanie and bannerstones donated by the Ed and Mary Harvey Foundation and Terry McGuire.

The extraordinary Hart pipes include an Owl Great Pipe from Fulton County, Kentucky; a Migrating Duck Great Pipe from Cumberland County, Kentucky; a Bird Great Pipe from Floyd County, Indiana; and a Duck Great Pipe from Meigs County, Ohio. Also on display is the well known Shoveler Duck Hopewell Platform Pipe from Livingston County, New York, with human effi gies on both sides of the bowl and Shoveler ducks engraved on the top of the platform. Such pipes were doubtlessly smoked in ancient ceremonial contexts, to establish bonds among the ceremonial participants and to convey prayers and supplications to the deifi ed forces of nature. The pipes will
be on display for a year.

With the Hart collection loan, the Art Institute’s presentation of prehistoric art from east of the Mississippi spans a period from the Middle Archaic through the Hopewell culture, approximately 5000 B.C. to 600 A.D. The permanent collection gallery also displays high quality items from the Great Plains, Southwest, and Far West, as well as from the ancient civilizations of Mexico, Guatamala, and the Andes of South America. Department Curator Richard Townsend is committed to exhibiting the finest works from the Indian civilizations of the Americas, both in the permanent gallery and in major exhibitions such as Hero, Hawk and Open Hand, American Indian Art from the Ancient Midwest and South.

The Art Institute of Chicago is located at Michigan Avenue at Adams Street, by Millennium Park near the shore of Lake Michigan. 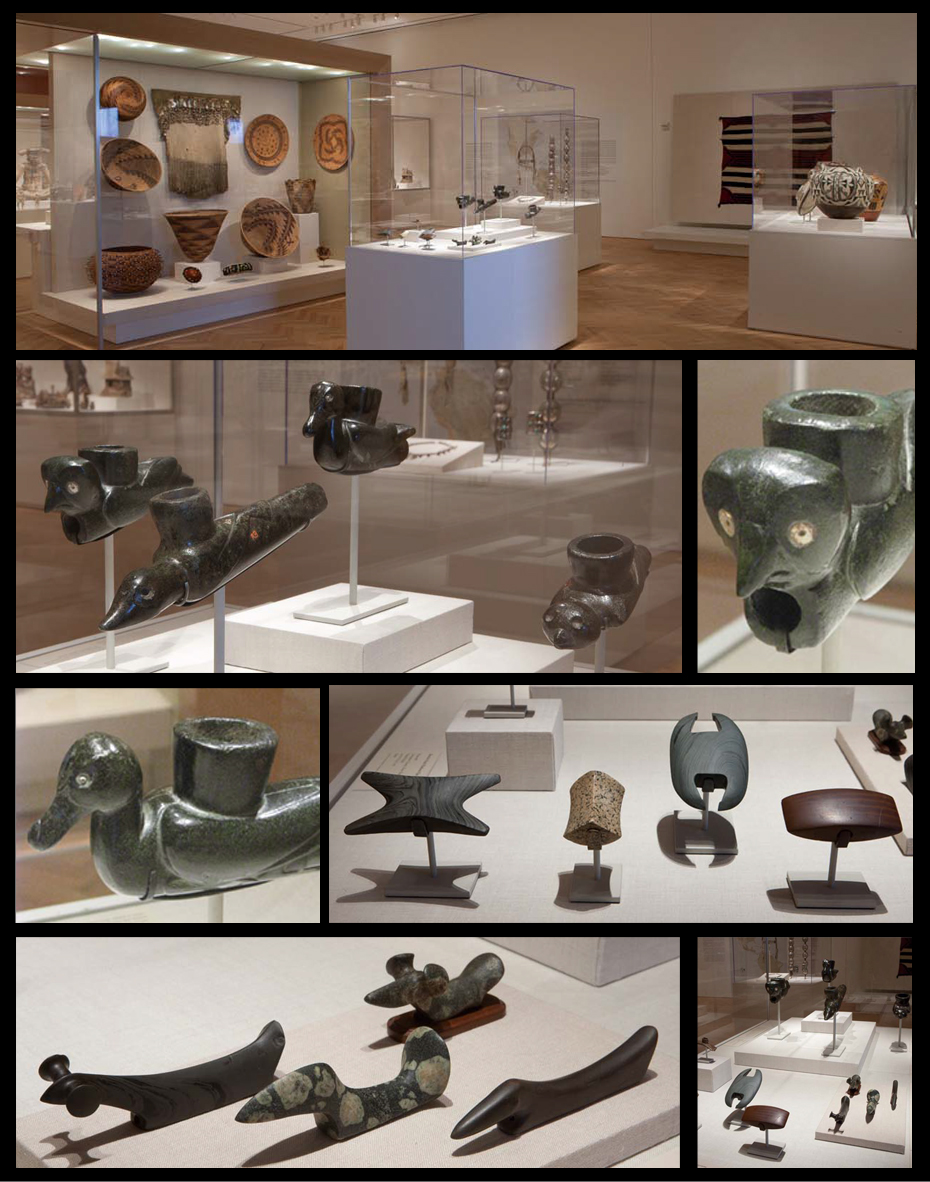 New installation of prehistoric North American objects at Chicago Art Institute’s Indian Art of the Americas gallery. In left foreground: Archaic Period bannerstones donated by the Ed and Mary Harvey Foundation and Terry McGuire. To their right: birdstones on loan from Oliver Skrivanie. To the left behind the bannerstones: the Shoveler Duck Hopewell platform pipe, and behind it four Great Pipes, all on loan from the Hart Family Collection. Photos courtesy of The Art Institute of Chicago, all rights reserved.