Sometime in the early occupation of Building I, this wooden effigy was placed on the floor in the northwest corner of a 4-foot-deep room we call Room 26. In 1994, when we were excavating the room, surprisingly we uncovered the head of the figure. At first, we had no idea what we had found. However, when its nose and left eye appeared, we knew it was something special requiring the expertise of a specialist like Eric Blinman.

The figure was standing in damp, sandy soil where it likely had been for many decades, perhaps centuries. Although wood in the ground can become saturated with water rather quickly, it is difficult for it to dry out under those conditions. Since the effigy’s head was soaked, we quickly covered it, making it as airtight as possible, and ran to call Blinman.

As the face and body of the effigy began to emerge under Blinman’s trowel, we thought its right eye was missing. (It was two days later, in our lab, that conservator Keith Bakker removed the mud that had hidden that eye.)

A later inspection revealed that the figure had obsidian eyes, an obsidian mouth, three-dimensional ears, an elongated nose up between its eyes, nipples, and arms with articulated fingers across the chest. White selenite plaster covered the area from the mouth to the bottom of the chin. It had pink pigment on the chest that became red as it moved down the sides.

This powerful sentinel had been carefully placed, facing wide-eyed across an empty room, assigned to its final post. Diagonally across the room was a door merely 15″ high and 11″ wide, which curiously had been sealed from the adjacent room and plastered over so well that its construction went almost unnoticed.

The wooden lady was carefully removed and placed in a plastic container lined with paper towels over aluminum foil. Her box elder body was 101/2″ tall, but it may have been an inch or so taller when she was new. She was 41/2″ wide at the shoulder and 3” deep. It was obvious that she had suffered too long from slow deterioration and the harsh treatment of time.

Two conservators who worked trying to stabilize the wood gave a sad diagnosis, stating that she could not be saved, and when she dried, nothing would remain but a mound of brown powder and three flakes of obsidian. Fortunately, our treatment proved them wrong. We placed a lid on the container, wrapped it tightly in a black plastic bag, and stored it in our refrigerator for more than three years. When the wooden lady finally emerged from her long, cold sleep, she was dry and amazingly intact. We were happy that we had thwarted the failure that had been patiently waiting.

Because of her extremely fragile condition, even now, nine years after we found the lady, we still have not seen her back. A radiocarbon date places her age at 563 years, give or take a few. She looks pretty good for a lady with that many birthdays.

Both conservators told us that we were at least a hundred years too late recovering this beautiful wooden woman, which emphasizes once again the urgency to [responsibly] excavate archaeological sites . . . . Important information is being lost as perishable objects lie rotting in the ground. 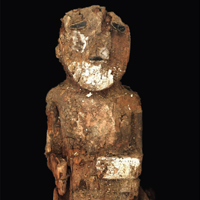 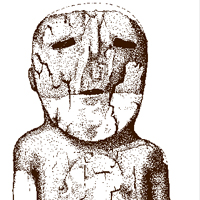 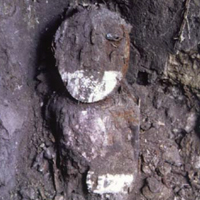 This is the wooden lady as we discovered her, standing in the corner of a room. We can only wonder what forces were at play while she was being carved and dressed in white and pink. We feel awed and respectful in the presence of this object and thirst.