Tracking artifacts down for old collectors can be about as much fun as finding on in the dirt (but not quite). This story is about legendary collector Paul Sellers and his two favorite axes.

Paul Sellers was born over a hundred years ago on February 16,1898, near Lewiston, Missouri. He married his wife Jean in 1922, and they had two sons, William H. and Robert P. He was a farmer in Lewiston, attended William Jewel College, was a Mason for sixty years and a World War I veteran.

Paul started collecting Indian artifacts in 1906, when he was eight years old. I would imagine there were many artifacts to be picked up at that time. He collected different point types, axes and hematite implements. His articles have been published in the Central States Archaeological Journal, Hobbies Magazine, and bulletins of the Missouri Archeological Society. The local and Midwest collectors referred to him as the “Dean” of collectors. The first Monday of each month there was a meeting at his home where, at times, twelve to sixteen collectors attended.

The last time I saw Paul Sellers was about 1980 at Ray Johnson’s Auction. Paul came with his cane and bib-overalls, as usual. He passed away on December 16,1984, at 86

years of age. After his death, I proceeded to get as many of his axes as I could. The hunt was on from 1985 to 1997, during which time I acquired nearly three dozen of his axes, including the fine hematite axe from Phelps County, Missouri pictured on page 7.

In 1995, I was at a show sitting next to Joe Kinker of St. Louis, and I was telling him I was looking for the second of Paul’s two favorite axes. Joe said “Well, I own it.” I knew that buying the axe would not be easy! In March of 1996, Joe brought the axe to the Illinois show at Collinsville, so that I could photograph it.

I had a new photo of the two favorite axes of Paul Sellers. Joe did not want to part with it at that time, so I waited. Sixteen months later, just before the St. Charles Show in July 1997, Joe called and asked if I was still interested. My response was,” YES!” I didn’t even ask him how much he wanted for it. The axe I purchased fro Joe Kinker was axe #100. It was found by L. Downs near Farmington, Iowa, Van Buren County. It then went to a Mrs. Brown from whom Paul Sellers purchased it in 1967. This axe is in color on the back cover of the book “KEOKUK AXES.” It is also pictured on color plate XXIX and in black and white on page 244 of that book.

To conclude my story of 12 years searching and waiting, I wanted to share my story with the readers and members of the G.I.R.S. I have now owned both axes for over 4 years, and they are my favorite two axes, also.

Bruce Filbrandt has been an active member of the GIRS for many years. He is a member of the GIRS Materials Screening Committee. He has long been recognized as one of the leading authorities on stone axes. He is the author of the book KEOKUK AXES. A long time resident of Iowa, Bruce now makes his home in McNabb, Illinois. 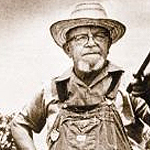 Paul Sellers on his farm in Lewis County, Missouri, “..with his cane and bib-overalls, as usual.” Photo courtesy of Ben Thompson, WHO’s WHO #5,pg.180. 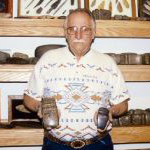 Bruce Filbrandt in the year 2001 with two Paul Sellers axes..”they are my two favorite axes, also”

Paul Sellers in a photo taken prior to 1984 holding his two favorite axes.  Photo courtesy of Ben Thompson, WHO’S WHO #5,pg.180.